2021 Q3 Review and Outlook – Inflation, Stagflation or Neither?

Year to date, the SPY returned 15.9%, bonds lost 1.7%, and a 60/40 portfolio gained 8.9%, which is only a bit above YTD returns at the six month point but would still be considered an impressive return for a full 12 month period.

Not much change in the latest inflation report.
We spent a lot of last quarter’s update talking about inflation, and not much has changed since then, as it is still too soon for the supply response to kick in (except in certain industries like lumber, since sawmill production can be ramped up quickly). Energy prices will probably remain high for the remainder of the year (especially with a cold winter), airline fares will rise and fall with COVID restrictions, and the new/used car situation is still snarled.

Are we going to experience “Stagflation?” – we aren’t there yet…yet.
Even without knowing what it means, “stagflation” is a scary-sounding word, and it has started to creep into the talking-head monologues on CNBC. Only the most bearish commentators mention it, but this is still more than the zero instances we have been hearing over the last 40 years. Stagflation combines low or negative GDP growth with very high inflation – essentially the worst of both worlds. The only major period of stagflation was in the late 1970s and early 1980s, as the OPEC oil embargo toppled an already weak economy.

The current reality isn’t nearly as grim. While we are indeed seeing a supply shock across many parts of the economy (e.g., energy, logistics and labor supplies), we also have a large “demand pull.” Demand pull means there is lots of demand that is “pulling” the economy. People are flush with cash (and a lot of cabin fever) and want to buy things and go places. In fact, they want to buy so many things that the infrastructure that supplies those things has been overwhelmed.

One statistic that bears this out is airfreight. The International Air Transport Association (IATA) recently published data that showed total airfreight volume up 7.7% from August 2019. In other words, demand not only caught up to the previous high-water mark set before the COVID crash but kept running. However, airfreight capacity is down 12.2% from pre-COVID levels, because most air cargo actually travels in passenger airlines (which haven’t fully restored all of their routes). There is a similar effect with seaborne cargo, and, as a result, there are over 70 container ships anchored off the Port of Los Angeles/Long Beach, waiting to be unloaded. (The usual count is only one or two waiting ships).

Another statistic is illustrated by this chart, which looks for every mention of the word “shortage “in an S&P 500 company’s investor call: 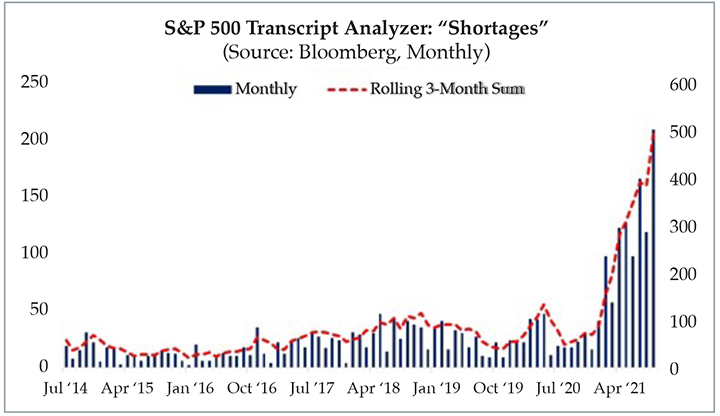 We do not believe that this will be resolved quickly – logistics executives are estimating that supply bottlenecks will persist until at least the beginning of 2022 (start your Christmas shopping early!) And, the longer supply takes to catch up, the worse effect it has on prices (i.e., “flation”) and on economic productivity (i.e. “stag”). Put them together and you get…all together now…”stag-flation.”

So, given the healthy demand (with more government money on the way), we are certainly not in stagflation right now. However, the longer the bottlenecks persist, the more sand that gets thrown into the gears of the global economy. Frustrated customers will cancel orders, businesses that can’t find labor will cut back service, and so on. This all has a gradual corrosive effect on the economy, so it bears watching.

Ultimately, we won’t fully get back to full speed until COVID recedes (along with government restrictions). Shutting down a busy port in China for a week or running chip factories in Taiwan at half speed (both related to COVID outbreaks) have had far-reaching effects on almost every sector. Fortunately, the re-openings have outweighed the shutdowns, so it is a matter of time. How much time remains the $64 trillion dollar question.

The government likes the “flation”.
Speaking of government money, two gargantuan spending bills are still being bandied about by Congress, with the Build Back Better (BBB) bill meeting the most resistance – particularly from the tiny moderate wing of the Democratic party consisting of Joe Manchin (WV) and Kyrsten Sinema (AZ). Senator Manchin balked at the $3.5T price tag, originally saying his limit was $1.5T. However, he seems to be inching toward $2.0T as the new ceiling (if you just write “T” instead of “Trillion” it makes it look smaller).

The amount and specifics of these two bills will continue to change multiple times – and West Virginia and Arizona will probably get some nice earmarks when all is said and done. What we can say is that – if the final BBB bill totals $2.0T with the infrastructure bill adding $1.5T, then $3.5T will be pumped into the economy. That will have the positive effect of increasing already healthy demand (plus MAYBE helping the supply issue via infrastructure improvements) but also maintain upward pressure on inflation.

The bond and gold markets are still quiet.
The yield on a 10-year Treasury bond has risen since last quarter, but only from 1.35% to 1.57% – which is still below March’s high of about 1.7% and 3.1% in late 2018. All things equal, bond traders are voting for more moderate long-term inflation than the Stagflationistas are predicting.

As we said last quarter, all things are not equal, and the Federal Reserve remains an active buyer of both Treasury bonds and mortgage bonds, which have contributed to low yields (and high house prices). However, the Fed is signaling a slower pace of bond-buying (the “taper”), which implies that the general bond market has been calling the shots.

Another favorite hedge against inflation is gold, and we have noticed a lot more ads on the radio pointing to inflation and offering gold as a solution.  Surely the price of gold has skyrocketed after the recent inflation reports. Actually, the price of gold (as measured by the SPDR Gold Trust ETF – GLD) was down 1.2% in the third quarter and down 9.9% year to date. Either gold is the bargain of the century, or the market is trying to tell us something.

Own a variety of assets.
Diversification hasn’t gone out of style, and the current market environment is showing its benefits.

As one might expect, the energy and materials sectors are doing quite well, with everything else chopping around. While oil and mining companies tend to be volatile and cyclical investments in isolation, we believe that they can help investors’ portfolios – sometimes they zig when everything else zags, and they tend to do well in inflationary environments. Foreign stocks can also do quite well with high inflation, as a) they tend to have a higher mix of energy and materials companies; and b) their dividends and stock prices are denominated in non-US currencies. To the extent that the US Dollar is weakened by inflation, owning assets that aren’t denominated in dollars will be good for your portfolio, all else equal.

Although bonds do not perform well in inflationary environments, they still have a role to play in many portfolios, as they are much less volatile than stocks (even during inflationary periods). Plus, interest rates will increase to compensate for higher inflation over time. As lower-yielding bonds mature, the funds are reinvested into higher-yielding bonds, which should gradually increase fixed income portfolio returns.

A well thought out financial plan can also bring some peace of mind, as it helps you focus on long-term goals rather than short-term market fluctuations. If you would like help creating or updating a financial plan, please contact us. 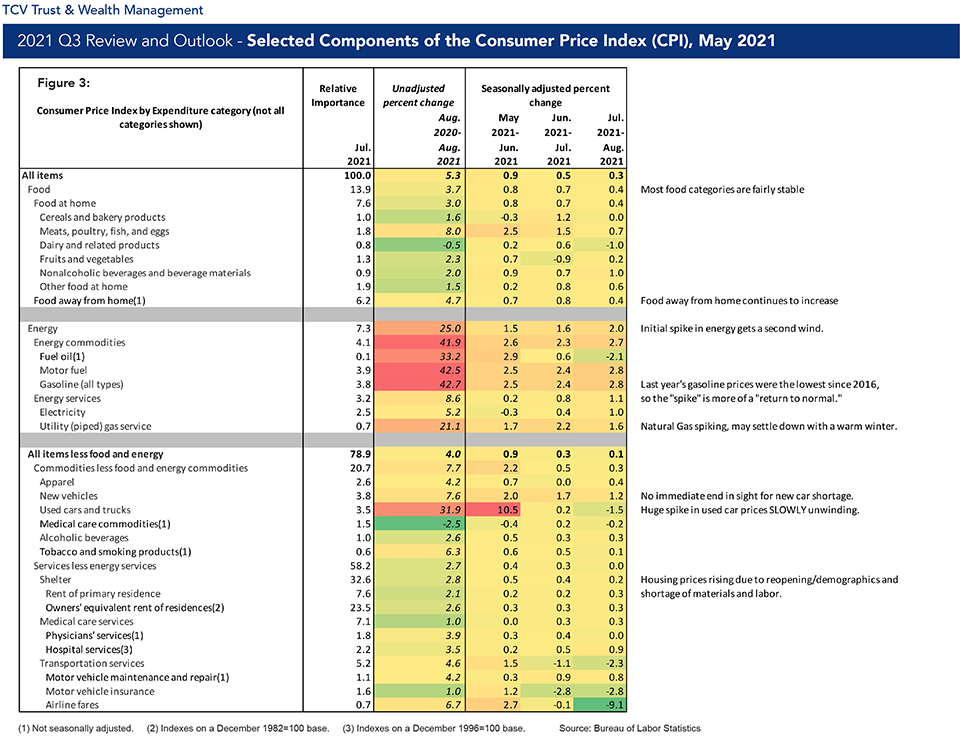