2021 Q2 Review and Outlook: Inflation: Transitory or Here to Stay?

Year to date, the SPY returned 15.3%, bonds lost 1.7%, and a 60/40 portfolio gained 8.5%. Considering that the S&P 500’s return for just the last six months is almost double its long-term average 12-month return, we can safely say that the year is off to a good start for investors. 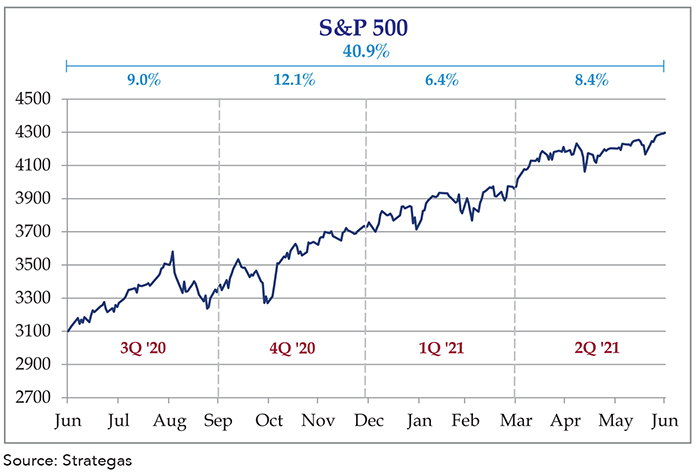 Inflation – transitory or here to stay?
We are at the halfway point of 2021, and the world looks very different than this time last year. Wave 1 of COVID was just beginning to recede in June 2020, and most of the world economy was still in lockdown mode. We are now seeing the opposite problem (if you can call it a “problem”) – the economy has come roaring back, but the gears driving the economy are rusty from disuse. Manufacturers and shippers were caught on their heels with limited capacity, which has driven shortages in many industries.

These shortages, combined with continuing government stimulus (with more being debated in Congress) and rising wages are stoking fears of inflation. This is quite a change in tone, as inflation fears haven’t been part of any serious economic conversation since, oh, 1980. Given our history (not to mention world history, which includes the Weimar Republic, Argentina and Zimbabwe among many others), it is understandable that the recent increase in inflation has sparked some concern.

To be specific, “inflation” is what happens when the currency (in this case the dollar) declines in value over time. It takes more and more dollars to buy the same amount of goods and services every year. Most economists generally agree that you need some inflation (although that would take many more pages to explain why) although there is considerable debate over how much is the “right” amount. The official Federal Reserve target is 2% per year averaged over a multi-year period, which is consistent with the recent historical trend (and which has supported a steady economic expansion since the end of the financial crisis in 2009). This is a far cry from the late 1970s, when inflation was well over 10% and the economy was in shambles.

Sustained, long-term inflation can have a corrosive effect on economies. For those who experienced “Stagflation” in the 1970s, the stress was palpable, and the stock market experienced a “lost decade” of negative real returns from 1972 to 1982. Furthermore, the cure was brutally hard, as Fed Chairman Paul Volcker raised short-term interest rates into the mid-teens, which induced a recession that lasted two years.

The latest CPI report is in favor of “transitory.”

Looking on the bright(er) side of the issue, it is not clear that the current inflation rate (5.0% in May) is sustainable, rather than – in the words of current Fed Chairman Jerome Powell – “transitory.” We can deal with a temporary spike in inflation – it is the long term, sustained inflation that becomes a problem.

One way we can assess the nature of the recent inflation spike is to look at the latest data from the Bureau of Labor Statistics (BLS), which oversees tracking and reporting the Consumer Price Index (CPI). The CPI report breaks up the inflation rates by categories, which can get as specific as “fresh milk.” The chart on the last page of this document hits the most important categories, and the numbers point toward the “transitory” side of the fence, since the categories with the highest rate of increase are mainly supply-driven and are already starting to settle back down. We have annotated the chart with comments, which we summarize below:

• Food is stable (except restaurant food).
Food prices pretty much tracked historical inflation rates in May (up 2.2% from 12 months ago). The only major exception is “Food Away from Home” prices, which have predictably increased as a) more people are going out to eat; and b) restaurants must pay higher wages due to a labor shortage (more on that later).

• Energy had a huge spike (from a very low level) but is drifting back down.
Oil and gasoline prices skyrocketed as people got back in their cars, but you have to put this in perspective – gasoline prices at the “COVID bottom” were the lowest since 2016, so we are really just returning to a normal trend. Also, oil/gas prices have fallen in both March and April.

• Used car prices are crazy.
Anyone trying to buy a new or used car? Good luck with that. Car dealers depleted their inventories during COVID to stay afloat. Then, just when people decided to buy a new car, they couldn’t replenish their inventory because of – a microchip shortage??? Fun fact – a new car has an average of 3,000 microchips as they get “smarter,” which is one reason why we own Aptiv (APTV) in our Global Value Strategy portfolio. Chip plants in Asia are still running at half speed due to sporadic COVID-related shutdowns, which means no chips. No chips – no cars. This has pushed desperate buyers to the used car market, which is also running out of inventory.

• Real estate is crazy (but partially related to lumber).
Anyone trying to buy or build a house? Good luck with that! Houses are going for well over asking price, with multiple offers. Some of this is a lack of houses for sale, and some is related to skyrocketing lumber prices, which have dramatically slowed new construction. The good news is that lumber prices have fallen just as fast as they have risen.

If there is a common thread here, it is that most of these factors are supply-related, which – in theory – can be resolved more quickly than a more pervasive, systematic type of inflation (where people start buying basic items today because they believe prices will be higher next week/month). One wonderful aspect of capitalism is that “the best cure for high prices is high prices.” Businesses are actively working to fill the void and take advantage of high prices. Chip plants will come back online, oil and gas wells will be re-opened (if not in the US then around the world), and more people will list their houses for sale. We have already seen this with lumber prices, which went from $700/1000 Board Feet in March 2021 to $1,750 in early May, then back to $700 at the beginning of July as sawmills increased production.

The bond market isn’t anticipating inflation.
As we discussed in last quarter’s update, owners of bonds do not want inflation, because interest payments are fixed, which means the last interest payment received on a 30 year bond is worth a lot less in real terms than the first interest payment. As a result, bond yields generally increase with inflation fears. However, something curious is happening in the fixed income world – bond yields have fallen as inflation has spiked. The yield on a 10-year Treasury bond peaked at about 1.75% in mid-March, and now sits at 1.35%. All things equal, this implies lower inflation expectations, not higher.

All things are not equal, of course, and we can’t ignore the fact that the Federal Reserve is an active buyer of both Treasury bonds and Mortgage bonds, which have contributed to low yields (and high house prices). However, there has not been acceleration in Fed purchases in the last few months, which imply that the general bond market has been calling the shots.

This doesn’t mean that bond investors are perfect forecasters, but – the risk-averse curmudgeons that they are – they usually tend to point in the right general direction.

However…there are still inflationary factors out there.
We are not Pollyannas, and accordingly are not assuming inflation will magically return to the nice low rates we have been experiencing since the 1990s. Once we get through this spike, it may in fact settle out to something higher than we are used to seeing, and there are two major factors that may keep the “new normal” above the 2%-2.5% range.

• Labor shortage/higher wages.
One big news headline has been the shortage of labor, especially on the lower end of the wage scale. In response, restaurants and retailers are offering signing bonuses and higher wages – and are still coming up short. There are a variety of reasons for this, but the important thing to know is that this is inflationary. Not only do retailers have to increase prices to keep up with higher wages, workers with more money will spend more money, which indirectly increases prices.

• Federal stimulus.
The Biden administration and a slim majority of Congress is still trying to push through additional federal stimulus money, this time in the form of a huge “infrastructure” bill which has a lot of…infrastructure…as well as a lot of stuff that you really have to stretch to call infrastructure. Regardless of the label, this would be another $2-3 trillion pumped into the economy if passed.

Diversification reduces the inflation worries.
It seems as if we will get past this initial supply-driven spike as greedy capitalists make more stuff to make more money, but it is still an open question as to where the long(er) term inflation rate will settle out. The bond market isn’t worried, but retailers, restauranteurs and congresspeople seem to have different ideas.

The solution to this (which is the solution to almost all concerns about the stock market and/or economy) is to own a wide variety of securities, as some companies do very well in an inflationary environment. This would include stocks in the energy, materials and real estate sectors. Additionally, stocks in general have been one of the best hedges against long-term inflation, as they have beat inflation by about 5% per year over the past 100 years. That is no guarantee of future performance, but businesses can raise prices in response to higher costs. And, despite the disadvantages of owning bonds if we are in a high inflation environment, they still provide needed stability to buffer the inevitable stock market crashes that seem to happen every ten years or so.

A solid financial plan that has been stress-tested for a variety of economic scenarios can also help bring some peace of mind and help clients fine-tune their asset allocation for long-term success. If you would like help creating or updating a financial plan, please contact us.

We hope everyone is staying cool and enjoying some much-needed vacation time this Summer, and we will be back with an update in early October. 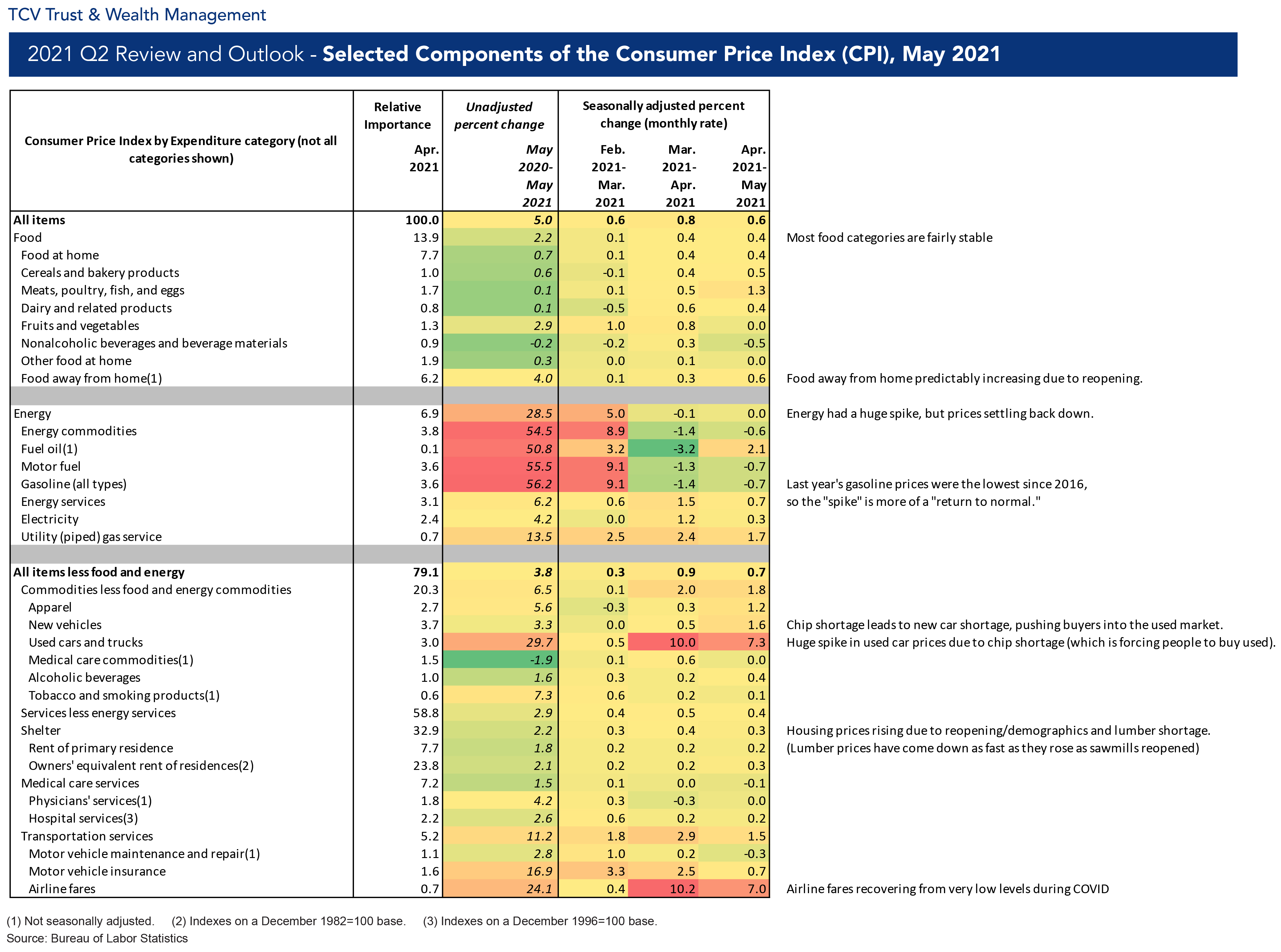