2021 Q1 Review and Outlook: “I believe that markets will fluctuate.” 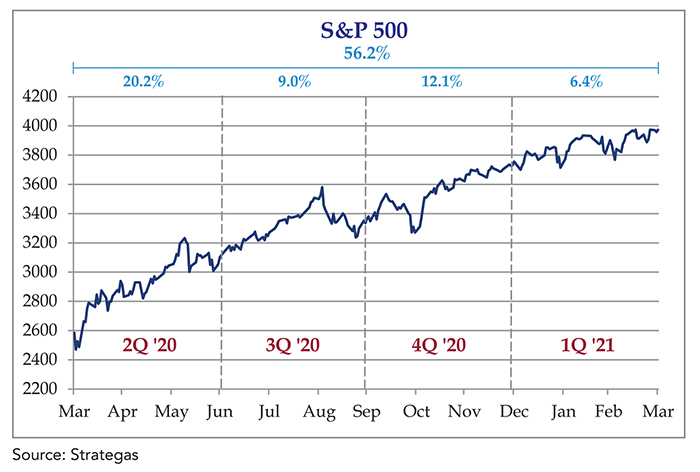 The late great banker John Pierpont Morgan was once asked by a young man for his stock market forecast, and he famously replied: “Young man, I believe that markets will fluctuate.”1  We wholeheartedly agree, and believe that it is a fitting quote for what the balance of 2021 may bring us.

There is currently a lot going on under the surface of the economy and financial markets. Usually, one or two major “market movers” are in the news, but pretty much everything is moving one way or the other right now. Some could have positive outcomes and others negative outcomes for the stock and/or bond markets. The major forces fighting for control of the economy at the moment include 1) Tax policy; 2) Economic growth; 3) Inflation; and 4) Interest rates. Let’s take a look at each one.

(Higher) Taxes.
We are probably going to have higher taxes in some form or another, and that can be felt directly via higher personal income and/or capital gain taxes and indirectly through higher corporate tax rates. Of course, the devil is in the details.

Right now, the Biden administration and congress are batting around several tax proposals – all of which raise rates in some way. A sampling of the current options include:
1. Raising the top marginal rate to 39.6% from 37% for taxable income over $400,000.
2. Capping itemized deductions to 28% for the $400,000 and higher income bracket.
3. Taxing capital gains as ordinary income for people making more than $1 million/year.
4. Raising the estate tax rate and/or lowering the estate tax exemption.
5. Increasing the income limit for Social Security taxes (now at $142,800).
6. Increasing the corporate income tax rate to 28% from 21% and enforcing a minimum rate on overseas income (i.e. a “global income tax”).

While this looks like a big scary list, it is far from being passed into law, and even some Democrats in Congress are waffling on certain provisions. We believe that the higher tax rate on the $400,000 bracket and some form of higher corporate tax rate are the most likely to be passed. The rest are less likely to be passed in their current form (i.e., without Congress people trading favors like Pokémon cards to get them across the finish line.)

That being said, we must acknowledge that higher taxes – especially higher corporate taxes – are generally negative for stocks. An extra dollar taxed on a company’s profits is exactly one less dollar in a shareholder’s pocket, and stock prices could “adjust downward” in response. It is the magnitude and timing of this adjustment that gets tricky – and there is also the possibility of this negative effect being offset by other positive effects.

Economic growth (both “natural” and “government made”)
Speaking of offsetting positive effects, those taxes are most likely going right back out the door in terms of enormous government spending programs, some of which have already hit your bank accounts. We won’t detail each program, because a) the currently proposed plans will be subject to even more horse-trading than the tax proposals; and b) there have already been trillions of dollars literally wired directly to our bank accounts with no strings attached, so the debate over the next installment being $1.5 trillion or $2 trillion seems pointless.

This tidal wave of money will be unequivocally positive for economic growth. It is already showing up in lower consumer debt levels, higher bank deposits and a shockingly sudden surge in the real estate market. (Good luck buying a home right now!)

Furthermore, we have been creeping ever closer to the mythical “COVID reopening,” and consumer discretionary stocks have reacted positively. Airlines are filling up flights again, and there have been reports of hotel room and rental car shortages in areas which are “open.” We believe that this trend would have happened with or without government support. The government is just giving it an extra push.

So, for all the negative headlines about taxes, inflation and interest rates, we cannot ignore the economic indicators, which are flashing bright green across the board. This tidal wave of money should ultimately find its way into companies’ income statements and balance sheets – and possibly stock prices.

Inflation
When we said that all this money sloshing around would boost the economy, we mean the nominal economy. Nominal growth is a combination of “making and selling more stuff” and “increasing prices on stuff that is sold.” The “more stuff” is real growth, the “higher prices” is inflation. Real growth + inflation = nominal growth. Almost every economist not named Karl Marx agrees that real growth is a good thing, and that high and unexpected inflation is a bad thing. However, “high” and “unexpected” are fierce subjects of debate.

Furthermore, economists (and the stock market, based on history) agree that a moderate amount of inflation is good and much, much better than deflation. The Great Depression was a “deflationary spiral” that devastated the economy. The COVID crisis also briefly knocked inflation backward, which triggered the extreme stimulus packages from Congress and the Federal Reserve. The “moderate” word is also very squishy. Is 2% inflation considered moderate? 3%? Measured over what time period? We will most likely push ourselves above the 2% mark in 2021, but we also had extremely low inflation over the past few years. Aren’t we just getting back to “normal?” It’s anybody’s guess.

Inflation also has a love/hate relationship with the stock market. While people generally buy asset classes like commodities, real estate or gold to hedge against inflation risk, the stock of a well-managed company is an excellent long-term inflation hedge. Stocks have historically returned about 5%-6% in excess of inflation over a long period of time. Think about it. What is inflation? Higher prices. Who increases those prices? Companies!

The trick is the timing. If inflation comes too quickly, companies won’t be able to fully pass on price increases to make up for higher input costs and their profit margins will compress, which will hurt profits and generally stock prices. This was the case in the horrible “stagflation” of the 1970s, as people didn’t have enough money to pay higher prices, so companies had to eat their higher input costs and their profits and stock prices got crushed. However, people currently have stimulus money coming out of their ears and unemployment is dropping. This (hopefully) creates an environment for companies to pass on the full amount of rising input costs and preserve profit margins. Right now, the stock market is voting that the companies succeed in doing this, but we are still early in this new cycle.

Interest Rates
Interest rates are in some ways the bridge between the “Main Street” economy and the “Wall Street” economy because they are very sensitive to both sides. The two most widely cited interest rates are a) the Federal Funds Rate and b) the 10-year treasury bond yield. The story on the Federal Funds Rate is straightforward – ZERO. Chairman Powell likes zero, and zero shall it be for a while. By keeping the short-term interest rate at zero, “cash is trash,” and investors will put that cash to work in higher returning (and higher risk) investments that will – in theory – provide some underlying support to the economy.

The 10 year yield is more market-driven and much more sensitive to expectations of real growth and inflation. It is the lowest-risk long-term asset in the world, and because of this, the yield is lower than almost every other form of investment. An investor will accept a low interest rate if a) the economy isn’t growing a lot (because she won’t miss out on a lot of growth); and b) inflation is low (because if the inflation rate rises to 3% and she is only earning a 1% yield on the bond, she will lose money on an after-inflation basis.)

This is why the yield on the 10 year treasury bond has been rising. Increased expectations for economic growth + plus increased inflation expectations = higher yields. What people (especially the goldbugs and Fed-haters) seem to forget is that treasury yields have been falling steadily since 1981, and this is a very small blip upward. The yield on a 10 year treasury bond hit bottom at 0.5% in August 2020, and is now quoted at 1.6%, which is quite a jump, except when you consider that the 10 year yield was 3.0% in 2018 and 14% in the early 1980s.

This doesn’t mean that we don’t pay attention to interest rates, because they do have an influence on the stock market. Treasury bonds are the “risk free rate,” so the higher this rate climbs, the less investors are willing to buy stocks (which are undeniably riskier than treasury bonds). If the 10 year treasury bond only pays 0.5%, a stock with a 2% dividend yield looks very attractive – especially if you believe it will grow over time. However, if you can get a 2% yield on a risk free investment, then maybe some investors will take the bond instead of the stock. After all, that future growth isn’t guaranteed. At a 4% treasury bond yield, a stock with a 2% dividend yield needs to have some solid growth prospects, or that 2% dividend yield might creep up to a 2.5% or 3% dividend yield, which means the stock price would need to fall proportionately.

Right now, it’s a mix of both, with economic growth taking the lead.

Putting it all together

If you’ve made it this far, you can see that there isn’t a clear winner in this battle. The current scorecard looks like this:
• Taxes – Negative
• Economic Growth – Positive
• Inflation – Neutral to Negative
• Interest Rates – Neutral (for now)

All these factors relate to each other, with often unpredictable effects. What does an investor do in this situation? This is where diversification earns its pay.  A well-diversified portfolio across sectors, countries and asset classes reduces the need for an investor to read the economic tea leaves to try and time the short-term swings in the market (which are driven more by psychology and emotion than economics anyway).

Regarding stocks, we try to own companies that have strong brands with pricing power, but also invest across all sectors, including energy and materials (which also do well during inflation). Furthermore, investing in international companies can help your portfolio during an inflationary environment, as inflation in the U.S. weakens the dollar relative to other currencies, making companies that pay dividends in Euros, Yen or Swiss Francs more valuable. Some foreign companies also operate under more favorable tax regimes than US companies.

And don’t forget bonds! A bond allocation provides a portfolio with a measure of stability in times of stress. While rising interest rates can hurt the value of a bond portfolio, maturing bonds can be reinvested at higher rates, which is a long-term positive. Plus, an investor with a healthy bond allocation has some “dry powder” to buy stocks in the inevitable case of a sharp drop in equity markets.

A solid financial plan that has been stress-tested for a variety of economic scenarios can also help bring some peace of mind and help the investor fine-tune his asset allocation for long-term success. If you would like help creating or updating a financial plan, please contact us.

We wish everyone a very happy and healthy Spring (aka “pollen”) season!