Imagine two archivists sifting through old stock charts 1,000 years from now and saying to each other “2020 must have been a great year!” 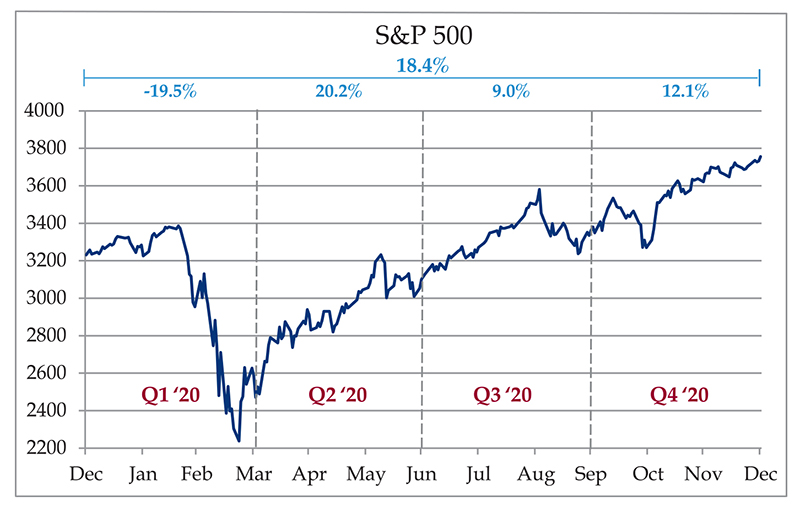 Just to circle back to the theme of last quarter’s post Q3 review and outlook, the strong fourth quarter returns occurred despite a hotly contested election that resulted in a Democratic president-elect. In fact, if an investor had exited the market on November 1st to “wait until things settle down” and got back in on December 1st, her stock portfolio would have only gained 1% for the quarter – leaving 11% on the table.

If we had perfect advance knowledge about the results of the election (as well as the craziness following the election), we would not have expected this sort of market reaction. Markets like certainty and stimulative, low(er)-tax policies. The disputed results (and 50 dismissed lawsuits that followed) combined with an expectation of higher taxes amidst a second wave of a global pandemic (almost forgot about that!) are the opposite of “certain.”

This is why we continue to stress – in the strongest possible way – that trying to market-time an election (or any big event) is a fool’s errand. There is an apocryphal saying among old-time stock and commodity traders (which we loosely paraphrase) that “short term movements in the market are designed to cause the most pain to the most traders in the shortest period of time.”

While we agree that 2020 was a unique year, with the kind of political environment not seen since 1968 (which also had a particularly nasty flu outbreak that bordered on pandemic status), we can partially explain some of the disconnect between “Wall Street” returns and “Main Street” problems by looking deeper into the data.

The S&P 500 is a “market weighted” index, which means that the components are weighted in proportion to their market value. For example, a company with a $40 billion market capitalization will have twice the weighting of a $20 billion company. While this is an efficient way to run an index, it can lead to some occasional head-scratching results.

In 2020, the top five holdings of the S&P 500 ETF (SPY) averaged roughly 20% of its total value. Therefore, their performance had an outsized influence on the index performance. This year, the big got bigger, with every one of the top five putting up exceptional returns (which is not typical!) The following chart shows how dominant the top stocks in the index were in 2020. This effect really shows up when comparing the performance of the S&P 500 and the S&P 500 Equal Weight Index (represented by the Invesco S&P 500 Equal Weight ETF – RSP). Almost a 6% difference, which is unusual considering the equal weight index has
outperformed the S&P 500 by about 1% per year since 1998.

The divergence is even more pronounced vs. the rest of the world, as the All-Country World ex-US ETF (ACWX) only recorded a 10.3% return. Not a lot of hot tech stocks overseas in 2020, and the strong dollar (which generally does well in times of global economic stress) certainly didn’t help companies that pay dividends in pounds or euros. 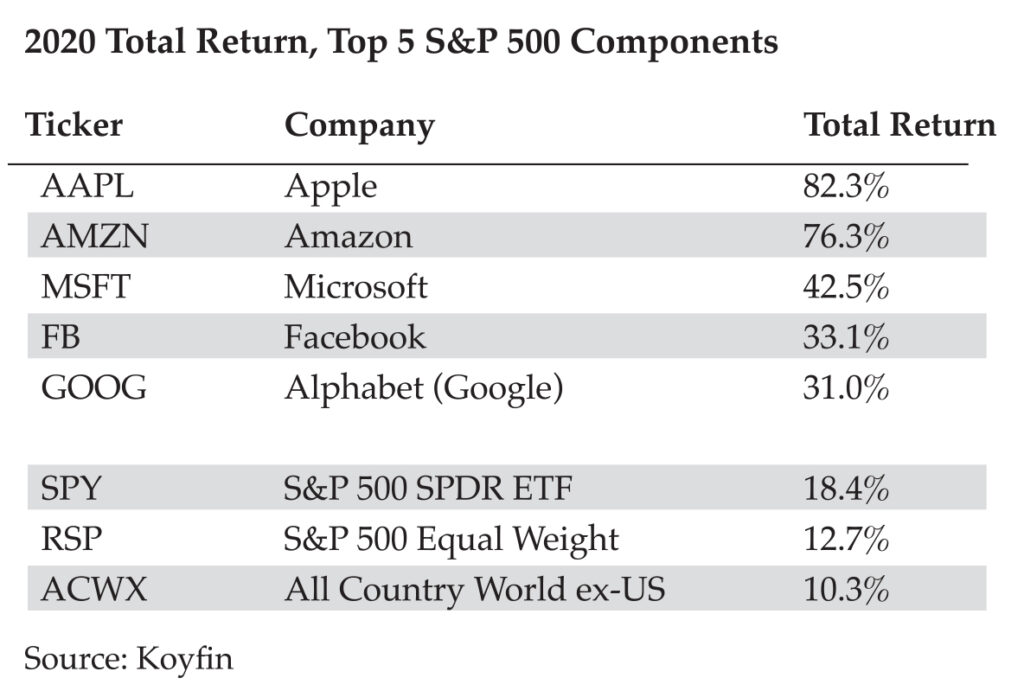 The stock market is not the economy

Take another look at the table above. See any hotels, restaurants, or airlines on that list? The industries hardest-hit by COVID certainly have representation in the major stock indices, but at a much lower weight (which is another reason why the S&P 500 and equally weighted S&P 500 performance diverged so much in 2020.) The top five were either indifferent to the pandemic (AAPL, MSFT) or directly benefitted from everyone staying home, ordering toilet paper, watching YouTube videos and arguing politics with their uncle (AMZN, GOOG, FB). Another well-known “stay at home stock” not on this list is Netflix (NFLX), which was up 67% in 2020 and is now #23 in the S&P 500.

And, don’t forget the hot quarantine stocks like Zoom Video (ZM) (up 395% in 2020), Moderna (MRNA), or Peloton (PTON) (both up 434%). Of the three, Peloton is not yet turning a profit, Zoom is barely profitable, and Moderna had never made a profit until developing its version of the COVID-19 vaccine. While we are grateful for these three companies – thanks to these three, we can stay connected with people, stay in shape, and stop the spread of COVID – we would define these three stocks as lottery tickets, not investments, and their success is more reflective of the trauma experienced by the economy than its growth (or lack thereof).

To cap it off, according to an analysis conducted by Strategas, a portfolio of stocks in the Russell 3000 that lost money in 2019 would have gained 34% in 2020. Let that sink in.

COVID-19 and the associated shutdowns hit the economy hard, and almost every company had a slowdown in profits or swung to a loss. However, if you look at most of their stock charts, you will notice that the stocks fell before the full impact was known. Then, in late March, stocks started to climb even as deaths accelerated and companies were reporting horrible results.

For example, Disney (DIS) lost money for the first time in years and suspended its dividend, yet the stock rose over 90% from the March 20th bottom point. While there were some company-specific factors (i.e., Disney+ growth exceeding expectations), investors were also seeing a path to reopening, which would help the beleaguered theme parks return to profitability. This story repeated across the market, to varying degrees.

This doesn’t mean that you should drive yourself crazy trying to read every daily market fluctuation. In fact, it means the opposite – you should think about long-term growth in profits and dividends across the cycles, since stock prices will usually beat you to the punch in the short-term.

With all that said, what is driving the market right now?

1) A double dip economy?  There was a sharp rebound in almost every economic indicator following the end of the first wave of COVID shutdowns, but we now have a second wave with more shutdowns. The current “V”-shaped recovery may turn into a “W” if the virus remains out of control and shutdowns persist.

2) Vaccines.  The good news – we have not one vaccine, but two (maybe three) vaccines! The bad news – progress is slow, and all of them require two doses spaced several weeks apart. The market will continue to react to news of faster or slower progress with the rollout, as it will have a direct impact on the timetable to fully re-open the economy.

3) Government stimulus. We finally got a second stimulus, although the total dollar value was less than half of the first bill and lower than many wanted.

Congress continues to debate a follow-on bill which would pay $2,000 per person, among other benefits. While one can argue about the long-term effects (positive or negative) of another round of checks, we believe that the short-term impact to the economy would be very positive.

4) Biden’s agenda. Now that there is a clear path to President-elect Biden’s inauguration, analysts will be parsing every sentence and every proposal for clues about future policy changes – which are generally seen to be non-market friendly (e.g., higher capital gains taxes, ending step-up of basis at death, higher income and/or estate tax rates, etc.) However, whatever comes out of his mouth now will change a hundred times before it becomes law, so trying to take specific actions now could result in a lot of tail-chasing.

Does this mean that everyone should go out and mortgage their house to buy more stocks now that a vaccine is on the horizon? Or, have stock prices run further than they should have and everyone should sell and wait until the bottom of the “W?” The answer is always “it depends on your long-term financial plan.” If you need money in six months for a down payment on a house, then that money should not have been invested in stocks in the first place. If your portfolio is the sole source of your income, then you should already have a stock/bond mix that can absorb short-term volatility. If you are young and regularly investing part of every paycheck, then you should not be worried at all, since this money won’t be needed for 30-40 years. If you have a solid financial plan and your investment policy is properly structured, then just rebalance if things get out of whack and try not to watch CNBC. Best wishes to all for a happy and safe 2021.