The stock market (and almost every other financial market) finished the decade with a bang, as stocks (as measured by the Vanguard Total Stock Market ETF – VTI) increased 30.7% in 2019, the total U.S. bond market (as measured by the US Aggregate Bond ETF – AGG) returned 8.5% and a 60% stock/40% bond portfolio gained 21.8%. These gains contrasted sharply with 2018’s results, when every major asset class except cash recorded negative returns.

With 20/20 hindsight, the markets had the advantage of a favorable starting point in January 2010, as the economy was just pulling out of the worst recession since the Great Depression, and stocks had hit bottom only nine months earlier.

Which begs the question – how many people in 2010 thought that it was a great time to buy stocks? There was still a lot of fear in the air – unemployment was still very high, and the economic recovery seemed fragile. Banks were crippled and many talking heads on CNBC were speculating about a “double dip” recession.

Furthermore, how did this past decade feel? Did it really feel like the stock market had one of the best decades in history? Past performance figures are easy to read in hindsight, because they package a whole bunch of time into one number – as if $10,000 was placed into a time capsule and $35,000 magically appeared at the end of 10 years. It didn’t actually work that way, because the owner of that $10,000 in the stock market was bombarded with news every day, reporting on every fluctuation like it was a decade-long football game.

One of the best ways to dampen the fluctuations of the market is through diversification – both within and across asset classes. Add some international stocks and REITs to the stock portfolio and add a variety of bonds to dampen the swings of your portfolio value. As the chart above shows, a 60/40 stock/bond portfolio didn’t match the overall return of a 100% stock portfolio, but the ride was smoother.

The Asset Class Returns chart below shows another, more colorful depiction of the benefits of diversification over the past 15 years, which we call the “asset class quilt.” Each box shows the performance of one of the major asset classes, and each column depicts a year, with the performance ranked from top to bottom. If you look closely, you can see that different asset classes were at the top of the list one year, but much lower in other years (and vice-versa). However, a portfolio diversified across every asset class stayed firmly in the middle. Not the best, but never the worst either. Also, the outperformance of any given asset class is random from year to year, and it is impossible to use the previous year’s performance to forecast the following year’s – sometimes it falls to the bottom, and sometimes it stays on a winning streak. 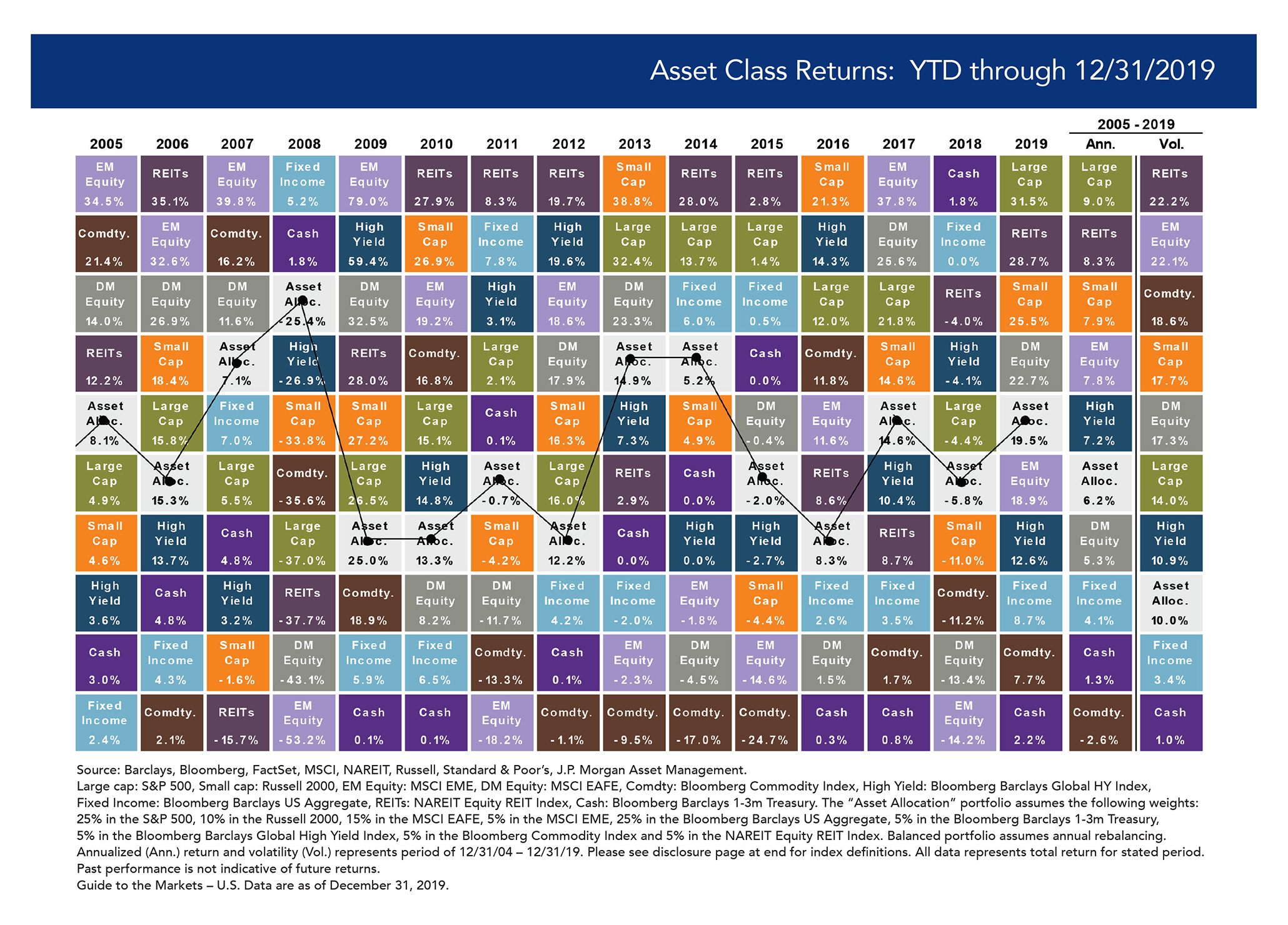 With all that said, here is our official stock market forecast for 2020…

We don’t know. And neither does anyone else, no matter how smart or eloquent they sound.

More than 50% of the stock market return in any given year is due to what is known in the industry as “multiple expansion/contraction.” If a stock earns $10/share in profits and has a 20x price to earnings ratio (P/E), the stock price is $200/share. Let’s say the company grows profits by 10% to $11/share next year. Depending on a variety of factors – many of which have little to do with the company itself – the same stock may trade for a P/E of anywhere between 15x (or lower) to 30x (or higher) over the next 12 months. This means that the stock could end the year anywhere between $165 and $330. So, despite a 10% growth in profits, an investor in this hypothetical company could record anywhere between a 21% loss and a 65% gain in the value of the stock.

While a diversified portfolio of stocks (such as the S&P 500 or the Dow Jones Industrial Average) can smooth out some of the biggest changes, this rule still holds – investors’ feelings about stocks (and the stock market in general) far outweigh the actual underlying performance of the companies in any given year. Plus, the events which drive these large swings in value can be random and unpredictable (especially with the Tweeter-in-Chief residing in the Oval Office), which makes forecasting any one year’s returns a fool’s errand.

While we can’t forecast an exact return for next year, we can highlight what we believe will be the key drivers and risks of the market for 2020:

1. Economic growth. Corporate profits generally follow economic (GDP) growth, and growth has been slow but steady. However, there have been some signs of further slowing, which add to the risk of a recession next year. On a positive note, we could have written this sentence every January since 2012. Every time the “inevitable” recession looms, the economy finds an extra little burst of energy.

2. The Fed. Speaking of bursts of energy, the Federal Reserve has been on a mission to keep the economy stable – much to the chagrin of many market commentators and conspiracy theorists. Up until now, the Fed has managed to walk the tightrope. Should they misstep, it could result an unpleasant 2020.

3. Trade. The trade war with China is far from over, and shipping companies are still feeling the pinch. An orderly resolution to the matter could provide another boost to the market, but “scorched earth” could throw a wrench into world economic growth.

4. Geopolitics. Speaking of wars, tensions are rising (again) in the Middle East. Defense companies and gold do well in wars, and oil companies do well in Middle East wars, but an escalation in the conflict with Iran would probably put a damper on the market as a whole.

One way or another, we will get through 2020 and 2021 and beyond, and, over many years, the fluctuations in “market sentiment” mostly even out and the fundamentals take over, since stock market growth generally follows earnings growth and dividend growth over time. To use the past ten years as an example, the dividend yield of the Total U.S. Stock Market index in early 2010 was just over 2% and dividends grew about 10% per year from 2010 to 2019, with this combined 12% per year number coming pretty close to the actual 13% per year return. (The extra 1%/year comes from an increase in valuation.)

So, if we were to estimate a return forecast for the next 10-20 years, we can use a few building blocks.

1. Start with the current dividend yield (the S&P 500 yields approximately 1.8%)

2. Assume profits/dividends grow in line with the economy (2%-3% per year, not including inflation)

3. Assume that companies can increase prices (and therefore profits) in line with inflation (2%-3%)

4. Assume that valuation over time adds or subtracts 2% per year to returns (i.e. people are either more or less willing to buy stocks at the end of the 10/20 year period – the longer the time period the tighter the range)

Putting these four factors together results in a long-term return estimate for stocks of 3.5%-10% per year. We believe that it will probably settle out between 7%-8% over a very long time period from this point.

Along the way, a 100% stock investor is almost guaranteed to experience a 30%+ drop in value, due to recessions, wars, or just a market panic (the Dow Jones Industrial Average fell more than 20% in one day in October 1987).

Fortunately, the end of recessions usually means higher-than average returns from that low point (just like in 2010), which helps long-term returns to get back to that 7%-10% trend.

With all of that said, the natural unpredictability of the markets takes us back to our boring but effective advice for financial and investment success:

1. Set an asset allocation based on your risk tolerance and financial plan (not what you think the market will do next year).

2. Periodically rebalance to maintain the desired asset allocation (which will automatically have you “buying lower” and “selling higher” to get back into balance).

4. Update your plan and investment policy as necessary as your financial goals change.

We wish everyone a happy and successful 2020.